“You or your parents lived it.  I helped start it.  And it was an accident.  It’s the era of myth, legend, sex, and extreme adventure called The Sixties.” 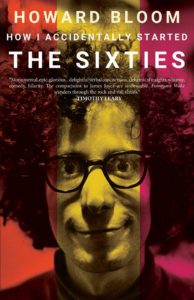 “This is a monumental, epic, glorious literary achievement.”

“Every page, every paragraph, every sentence sparkles with captivating metaphors, delightful verbal concoctions, alchemical insights, philosophic whimsy, absurd illogicals, scientific comedy routines, relentless, non-stop waves of hilarity.
“The comparisons to James Joyce are inevitable and undeniable.  Finnegans Wake wanders through the rock ‘n roll sixties. “Wow! Whew! Wild! Wonderful!”  –Timothy Leary
“I’m a huge fan of Bloom’s science books, Global Brain and Lucifer Principle. Actually I consume all science books, and my two all-time favorites are the two I just mentioned, just above Consilience, The Selfish Gene, and The Blank Slate. So naturally I was interested in this. A humorous memoir? Hard to believe it’s the same genius, except for the unmistakably colorful literary style. I couldn’t stop reading! What a rip-roaring story! It made me realize the reason Howard Bloom isn’t frequently mentioned in the same breath as Stephen Hawking, Richard Dawkins, and EO Wilson is that his genius is not comparable to any other. Is this the life you need lead to become a scientific visionary? If so, Steven Gould should have dropped more acid and shoplifted with his jock strap.” — bookfan, Amazon.com

“I blasted through Howard Bloom’s How I Accidentally Started The Sixties like the wildfire swallowing up my mountain in California. I loved it. The molecular amusement ride, the sexual Disneyland, the Chevy 350 Impala blasting down the freeway at 120 mph. The universal essence is its brilliant simplicity…..Reality is really a mind field seen through Bloom’s neurotic Buddha-like mind resplendent with every major family issue mortal humans will ever come across in a life time: identity, parents, meaning, self, non-self, food, habitation, education, goals, marriage, family, children, God, sex, more sex, DRUGS. It slithers like a rattlesnake across the page, the way a story should. What I love most is the off the wall comedy. Howard Bloom as Harpo Marx riding a freight train like Buddha carrying his life in a sleeping bag. I mean it’s priceless. Bloom’s psychedelic journey across the American landscape, is deciphered through the irresistible minds of murderers, crackpots, Nobel Prize Playboy bunnies, scholars, waiters, hobo gurus, cops, professors, French majors, psychiatrists, cock suckers, recreational drug users, Mormons, Jews, nut jobs, laundry mat owners, demonic children, lizards………..Aldous Huxley with a pinch of Timothy Leary………….and every molecule in the universe. It separates Bloom from any scientist/global mind who ever lived. Richard Feynman, Albert Einstein, and Aldous Huxley would be proud. Each man strived to marry science, art, and poetry but never managed to pull it off. How I Accidentally Started the Sixties does. I salute Howard Bloom. His doctrine sparkles every page with his Promethean fire; distilled in Shakespeare’s immortal words, ‘From women’s eyes this doctrine I derive’…..[women] are the books, the arts, the academies, that show, contain and nourish the world.’ Love’s Labour Lost, only in Bloom’s case, found, lost, and then found again. God only knows what else this mastermind is hiding from the rest of us.” –Mark Lamonica, winner of the Southern California Booksellers Association Nonfiction Award, author of Rio L. A.: Tales from the Los Angeles River, Whacking Buddha: The Mysterious World of Shakespeare and Buddhism, and Junk Yard Dogs And William Shakespeare.

“Howard Bloom’s raucous ride through the 60s is a treat you cannot deny yourself. The book possesses all of the exhilaration of the era it recaptures: the fantasies and follies, the search for truth, peace, and of course, true love. How I Accidentally Started The Sixties is youth itself — tentative, tenacious, charming and cathartic — a journey you’ll miss when it’s finished.” —Patrice Adcroft, author of Everyday Doughnuts,former editor Omni Maga zine,founding editor In Style Magazine, former editor-in-chief Seventeen Magazine

“A dazzling, dizzy, uproariously funny descent into the Sixties. Howard Bloom is a brilliant raconteur.”— Sol Gordon author of Why Love Is Not Enough

“What you discover in How I Accidentally Started the Sixties is Howard Bloom, the contemporary Rabelais–or the contemporary Jonathan Swift. How I Accidentally Started the Sixties insists on enthusiastically slapping one’s head around to create a kind of gaga that is wild and unique.”  — Richard Foreman, MacArthur Genius Award Winner, founder The Ontological-hysteric Theater

“Hugely entertaining.  Bloom brings together a startling assortment of ways of looking at the world.  The result is utterly unique.”      —Matt Thorne, British novelist, winner of an Encore Award, longlisted for the Booker Prize, co-founder of the literary movement, the New Puritans

“What a wonderful book.  Leave it to Howard Bloom to invent what feels like a new literary genre.”  —Carl Gottlieb, former executive producer WUSA TV news Washington DC, former Deputy Director of The Project for Excellence in Journalism.

“I have just landed from the hurricane Irma-like whirl of reading How I Accidentally Started the Sixties. A vivid, gripping and humorous memoir of a crazy journey that Bloom somehow survived. Bravo for How I Accidentally Started the Sixties. And bravo for Bloom’s life of exploration of body and soul.”  — Alan Riding, Reuters, The Financial Times, The Economist and The New York Times, author of And the Show Went On: Cultural Life in Nazi-Occupied Paris.

“A beautiful memoir about a remarkable life.”  —Stephen Macknick, neuroscientist, Scientific American columnist, author of Sleights of Mind and Champions of Illusion.

“A humorous memoir? Hard to believe it’s the same genius, except for the unmistakably colorful literary style. I couldn’t stop reading! What a rip-roaring story! It made me realize the reason Howard Bloom isn’t frequently mentioned in the same breath as Stephen Hawking, Richard Dawkins, and EO Wilson is that his genius is not comparable to any other. Is this the life you need lead to become a scientific visionary? If so, Stephen Jay Gould should have dropped more acid and shoplifted with his jock strap.”  — Joe Quirk, author of Sperm Are From Men, Eggs Are From Women and From Monkey Business to Marriage, president, The Seasteading Institute

“How I Accidentally Started The Sixties is wonderful.  Howard Bloom is one of the greatest stylists I have ever read.”  William L. Rivers, Paul C. Edwards Professor of Writing, Stanford University, author of Free‑lancer and Staff Writer 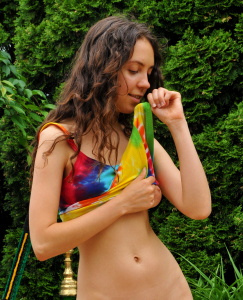 How I Accidentally Started the Sixties will be available for sale August 2017.